Fresh from her win at the opening FIM World Trial’s Championship round in the Czech Republic just four days earlier Emma Bristow had no time to enjoy her victory as she had to switch back to the Sherco Enduro machine for the XGames in Austin, Texas, USA.

The current Ladies FIM SuperEnduro World Champion finished 5th after a close battle for 4th in the closing laps of the race. Based at the famous ‘Circuit Of The Americas’ the event took place in blistering heat and humidity on the  fast open track with big jumps with not many technical elements to the circuit.

A full starting grid of 12 qualifiers raced in the final which was broadcast on live television and attracted thousands of spectators. Emma set the 4th quickest lap time on her ‘Hot Lap’ not far from the front runners but after a bad start in the race she worked hard to fight her way back to a 5th place finish.

Emma Bristow: “I love this event as it’s simply an amazing experience to race in front of such huge crowds. I am a little disappointed with my result as I know I can ride much quicker but because of my world trials commitments it has made it hard to practise for the event”.

“On reflection it was always going to be hard to go from the trials discipline straight into the XGames- EnduroCross and a ‘race mode’ so I am pleased to walk away with 5th place.  I am determined to return to Austin next year and compete for a medal”.

“The Sherco 250SEF was brilliant in the race and I have to thank the factory and Sherco USA for making it possible for me to race in the XGames – Thank you”. 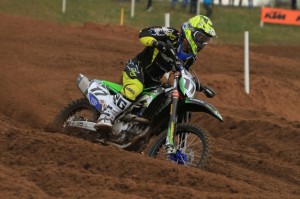 The iFly Lanes Kawasaki team survived tough weather conditions for the Maxxis British Motocross Championship season opener at FatCat Motoparc near Doncaster on the weekend. Persistent rain threatened a washout, but with an amended schedule, the round went ahead, with the team scoring points for every rider.

Qualifying in the morning was amended in that there would be no super-pole sessions. The MXY2 class went out first, and team rider Ben Putnam put in a good time in fourteenth. Next out was the MX2 class, and here riders Lewis Trickett and James Harrison finished their qualifier in thirty-third and twenty-ninth respectively. MX1 rider Alfie Smith was out last, going to the start line in twenty-first.

In the amended schedule, the MXY2 class only had one race, and Putnam made it count. Off the start in sixth, he stayed the course throughout, losing only a place or two before recovering those in the final stages of the race and ending where he started, finishing as highest scorer of the team on the day.

For Trickett, the first race ended before it really started. Although he got off to a mid-pack start, he had to pull off nearly a lap later with a pierced crankcase after crashing with another rider, and spent the rest of the race on the side lines. Case replaced, the next race went much better. In the atrocious conditions, another mid-pack start translated into some early race gains before settling into a solid rhythm. Without goggles, Trickett was stuck in thirteenth for the latter half of the race, ending the day in nineteenth.

Harrison also suffered an up-and-down day, although he was able to make the best of the worsening conditions to score his first points of the season. In the first race, a bad start left him playing catch-up in the first few laps. Undeterred, he battled with several rivals to trade places throughout, ending the first race in twenty-fifth. In the second race, he took ruthless advantage of the conditions after going to ground in the first lap, moving back into the top twenty after four laps. He then set to work to gain more positions throughout. Although one position had to be conceded with two laps to go, he nonetheless finished nineteenth with two points under his belt, and twenty-fifth on the day.

Smith also improved throughout the day. In the first race, a bad start turned into a solid run in the top twenty, but in the closing laps, a second wind gave him enough of a boost to make a last-lap move on several rivals, ending the race in seventeenth. In the second race, he made good progress in the early laps, leapfrogging from twenty-eighth to seventeenth and then to fourteenth, and then pushing past slower rivals to end the race in eighth for a twelfth overall on the day.

Commented team manager Graham Harrison: “It’s been a reasonable day considering the bad weather. Ben put in a solid result in the MXY2 class, which we’re pleased with, Lewis had a bit of bad luck in the first race but the second race shows that he can be a top fifteen contender. James had James had a good start in the second race, but crashed in the fourth corner, which put him last. He battled back to nineteenth and scored his first points of the season, which is a good start. Alfie also did well, especially in the second race where he finished eighth. I hope that Canada Heights next week is better, and we can improve on this week’s results.”

Ben Putnam (#10): Today went good, qualifying was a bit difficult because I got stuck behind a lot of people and expected to do a bit better than I did. In the race I got quite a good start and was around fifth, then it got wet and real bad and a couple of guys got past me, but I worked my way back to sixth and that’s how it was, just stuck in and tried my hardest really.

James Harrison (#153): Today were really hard conditions, I had an average qualifying, struggled and kept stalling my bike. We got that sorted for the race, and I finished twenty-fifth in the first race which I was not happy with, I came from the back of the pack, so it wasn’t that bad, and in the second race, which was a mud fest, I got a good start
but crashed in the second corner which put me in dead last. I came back through and
scored two points, so was quite happy for the team.

Lewis Trickett (#214): Today wasn’t that great. The first race ended before it really started, the second race I was lucky not to have anyone right in front of me for pretty much the entire race. I carried on and ended up thirteenth, and that’ll do. 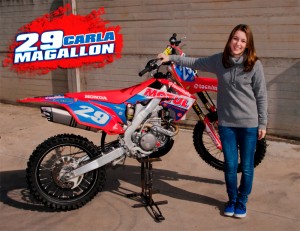 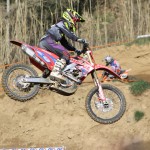 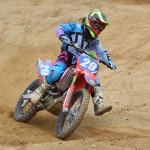 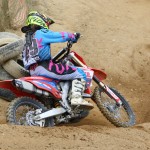 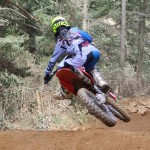